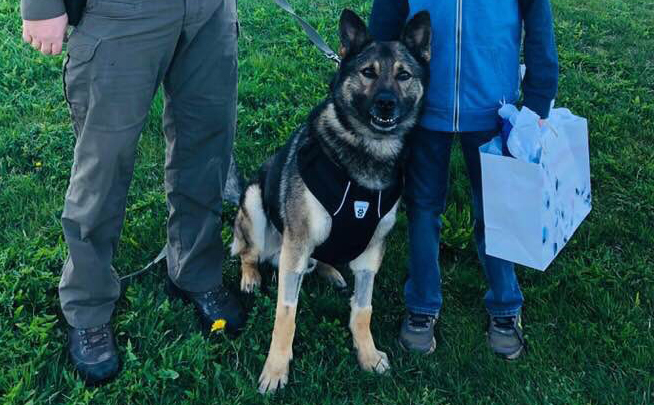 Bo was born in Innisfail, Alberta at the RCMP Police Dog Service Training Centre on June 11th, 2012. Bo and Cpl. Murnaghan spent two years in Saskatoon before being posted to Antigonish, Nova Scotia.

Bo was a champion at finding missing persons. On one occasion, Bo was able to locate a young man who had been ejected from his car and into the forest. Luckily for the young man, Bo found him right in time and he was able to recover from serious injuries. But one call stands out more than the rest. Bo and Cpl. Murnaghan were ambushed by a suspect who had just shot and killed his neighbor. They were trapped in a graveyard for over four hours while the suspect, armed with night vision, scopes, and high powered rifles shot at them. Bo was seriously injured, and was forced to retire.

Nowadays, Bo spends his days being pampered by Cpl. Murnaghan, his wife, and their two children. He loves his daily massages and even enjoys the odd bit of yoga – mostly the downward dog pose! He’s very vocal and will groan his tales of heroism to anyone who will listen!

It’s not all yoga and bliss, however, as Bo still suffers from several spinal cord injuries as a result of the injury that forced him to retire as well as disc deterioration.